﻿
James Common remains in pole position in the NGB comparative league thanks to a May clearing up on the later returning migrants at Stobswood including Wood Sandpiper and Garden Warbler. He is the first person in the league to break the 100% barrier, a great effort considering more than half the year is left! My own Lancaster patch isn't too far behind in second position, with May seeing a first for patch Little Ringed Plover take up residence at the reservoir. Several competitors in this league are now away from patch for the summer so there will be less movement over the coming months.

With Anthony Bentley leaving his Frampton patch for the time being and thus not registering any new species, Joe Stockwell has extended his lead at the top of the NGB points. Following his mega April he showed no signs of slowing down on his Weymouth patch adding a Purple Heron at Lodmoor (a Dorset tick to boot) and his second self-found Bee-eater of the year! Anthony being out of the running has allowed Jonathan Farooqi to close the gap to second place to just 1 point. A productive May at Druridge included 4 Temminck's Stint, a Spoonbill and a patch lifer in the form of a Black Redstart. A whole host of late summer migrants made up the highlights from the rest of the league, species such as Spotted Flycatcher, Whinchat, Grasshopper Warbler and Little Stint making several appearances.

June has seen some mega species turning up across the country with at least 1 appearing on a patch in this league, so expect some big scores at the end of this month! 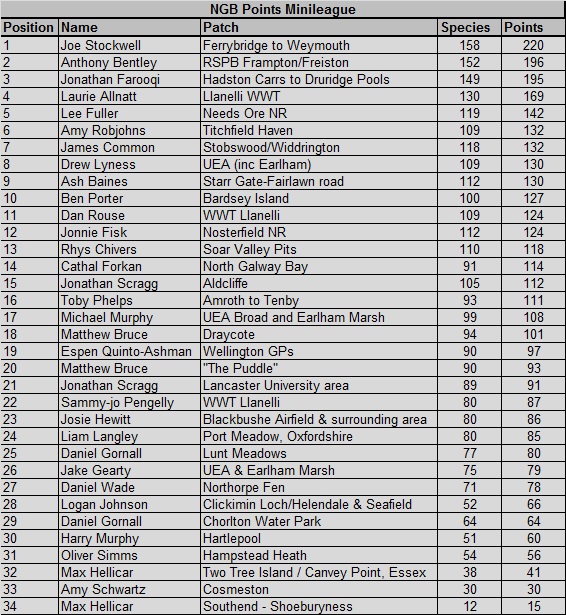 Email ThisBlogThis!Share to TwitterShare to FacebookShare to Pinterest
Labels: 2015, May, Minileagues, NGB