No doubt about the bird of the month in Coastal North league. Eastern Black Redstarts have been one of the features of this spectacular autumn and have already made appearances along the coast. This time it was Alan Crossley's turn, bagging all of the find points for his bird in Hartlepool.

In the comparative league Ash Baines is holding the flag for the west coast, with a spectacular 131%. Damian Money has had an immense autumn, but 10% adrift, it looks like quite a gap to close and would take quite some Christmas present to do it! The man formerly known as Mr PWC, James Spencer, has continued a good run at Barmston with late autumn/winter specialities like Glaucous Gull,  Little Auk, Great Northern and Black-throated Diver...a podium spot looks to be sealed! Six patches are now over the 100% marker and there is still time for those in the nineties.
﻿

In the points league, the Spurn/Easington trio are now dominating the top spots. Only Paul French added in November though, putting pressure on those top spots. Highlights and low light for Paul was a Pallid Harrier - superb bird but appalling views made all the more galling by the fact that it flew over his house when away with work. Still a good month in all with eight species added including Cattle Egret and bonus points for Long-tailed Skua.

Away from Spurn, Nick Addey further north at Long Nab had second Short-toed Lark of the year, but this time with the added sweetener of bonus points. He also added Black Guillemot which is not an easy bird on the east coast. This year looks like it will be a Waxwing year, so a garden tick for Andy Hood at Flamborough was a welcome addition to his patch list. Shorelarks are harder to come by these days it seems, so sightings at Whitburn South and Crook Bank of this beautiful bird were certainly amongst the months highlights for John Chapman and Nige Lound. Less spectacular but a bonus pointer none-the-less, a Richard's Pipit a dose of extra points for Jonathan Farooqi at Hadston Cars. A Black-necked Grebe at Whitburn was an unexpected patch tick for Mark Harper.

But as you might expect in November, seawatching was the name of the game and in addition to those mentioned above - others noted Glaucous Gulls, Little Auk, late skuas and divers and perhaps best of all a redhead Smew at Newbiggin-By-The-Sea for Gary Storey. A Sabine's Gull for Will Scott at Hunmanby Gap game him extra points in the month - who will win in the Hunmanby/Barmston battle! 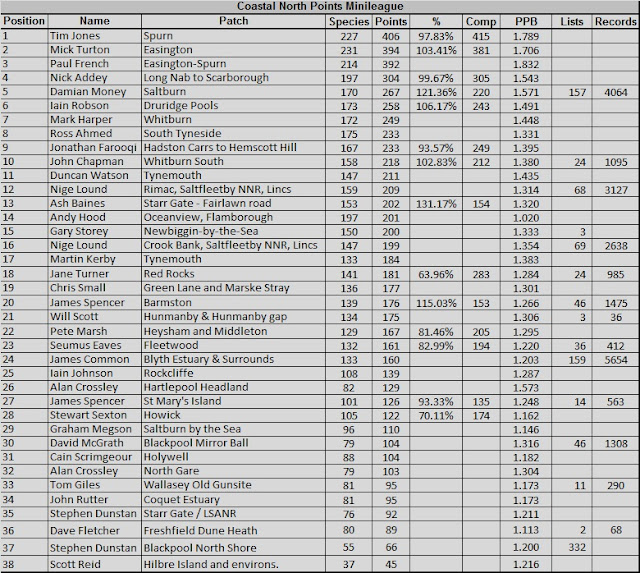