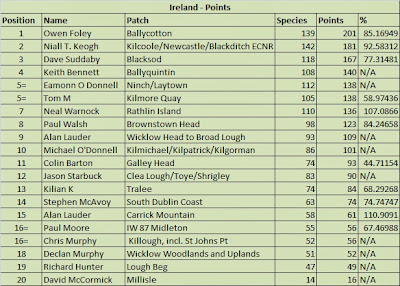 ﻿Some good scoring in the Irish points table but with the Autumn still to play and plenty of American and eastern goodies bound to boost the scores, especially for those inveterate self-finders on the frontiers this league is likely to be wide open. Heading up the table, Owen Foley, has 139 species and 201 points with Niall T. Keogh and Dave Suddaby in pursuit. How this shapes up? Ask us in three months.

Only two of the comparitive patches have topped 100% with Alan managing 110% at Carrick Mountain so far - a true show of the value of the comparative tables. Neal Warnock at Rathlin Island is not far behind on 107%.