A quiet March for Nick Robinson but his three points gained were still enough to keep him top of then Inland EA comparative table, cresting 90%. 11% behind in second is Ben Rackshaw at Downham Market while Nick Moran has been deposed from the podium and slumps to 7th place (not alot between 2nd and 10th in all honesty). Ben Moyes in Gipping Valley takes advantage to move into third.

Jamie Wells and Ben Lewis are used to duking it out at the top and find themselves in first and second respectively and it only took until March for their now familiar bilateral points domination to start but an interloper has appeared in joint second - Mr Birdtrack himself is level with Ben thanks to a Common Redpoll at Thetford. To be fair to Nick he was in second in February but how long can he hang on?

March's highlights were topped by 5 Cranes for Alison Allen at Thorpe-next-Haddiscoe with bonus points for finding them. A Great White Egret at UEA was a handy three points for a couple of the NGB patchers as Jake and Michael both connected. Despite this they are third and fourth/last in the UEA mini-minileague. Elsewhere Black Redstart at Surlingham and a sprinkling of Sand Martins, Little Ringed Plovers and Chiffchaffs were the best of it. 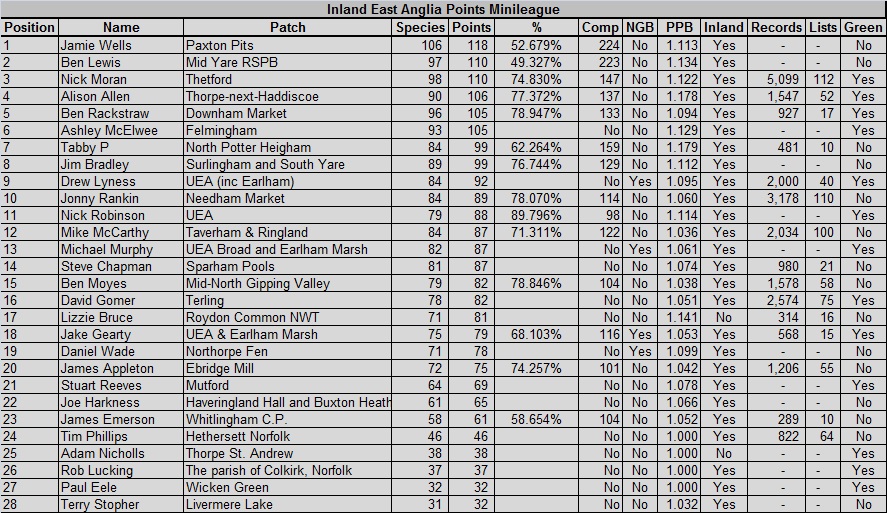