Owen stretches his lead to a monumental 104 points. This one is done and dusted unless WADA come in with doping allegations. Owen added a remarkable 50 points for just 11 species in October - fantastic work including self found Semipalmated and Baird's Sandpipers. Niall T. Keogh in second place added 4 species and 11 points with his highlight finding a Sabine's Gull. Neal Warnock on Rathlin managed to climb from 8th place to 5th with an additional 7 species and 11 points. 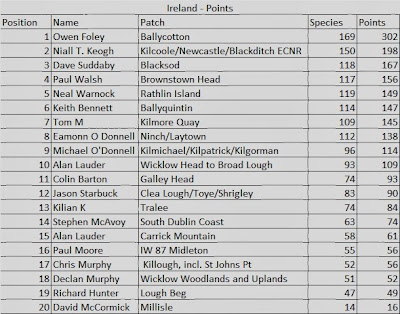 Owen Foley's exceptional October manages to propel him to the top of the comparative table and leapfrogging Neal Warnock and Alan Lauder in the process. Alan in the meantime slips to third place with no updates. Both Paul Walsh and Niall T. Keogh have managed to join the top 3 in the hundred club. Can anybody catch Owen in the comparative stakes? It looks very tough but a couple of late gems could do it.