If you thought Andy Johnson was going well before I'm struggling for superlatives to describe his October. With Semipalmated Plover, Red-breasted Goose, Dusky Warbler and Yellow-browed Warbler all finds he has nearly doubled his lead in the points table and is now 104 points clear. Respect is due for an amazing effort, especially the plover which is a great find. Joost Brandsma's Leach's Petrel lifts him into the top 5 at Adam Faiers expense. 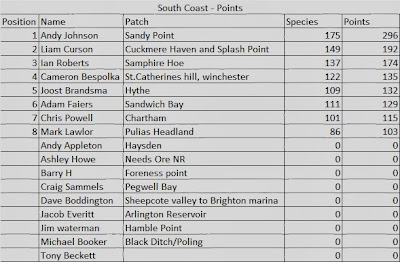 Despite Andy Johnson's superb October Liam Curson maintains top spot in the comparative league. Andy has however managed to join the 100 club - only the second member of the South Coast league to do so. Chris Powell has managed to overtake Mark Lawlor. Nevermind Mark - just a bird. It looks like a race between Andy and Liam for first place with Ian Roberts fighting with both Chris and Mark for third.