After a great Excel spreadsheet failure in the sky there was a backlash (well mild irritation) amongst Midlands patchers that we had failed to update their scores for August. Please accept our apologies and here we right those wrongs with a reboot of the table. 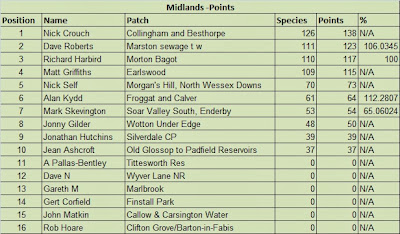 We only received a handful of responses for August in the Midlands but the top 3 all made additions with Dave Roberts overhauling Richard Harbird. With just one species and six point between them this tussle could last until the year end. Nick Crouch extends his lead at the top with 15 species and points clear air between him and Dave.﻿

Both Dave Roberts and Richard Harbird hit 100% in August in the comparative table but Alan Kydd stays outfront despite no additions during this period.
Posted by Pat Work at 22:55