Crikey, it's close at the top in the London area! In the points league, there are just 14 points separating the top three, with Adam Bassett in first, Paul Whiteman in second and not to far behind at all, Marek Walford in third place. Rather neatly, if we were to have a league for the number of species, it would fall into the same order too. 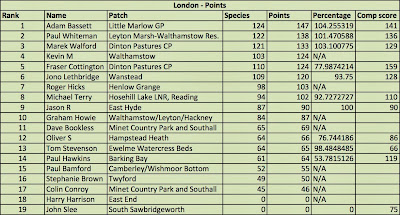 Adam also leads the comparative league, with second and third places reversed from the points league - but in the comparative league things are even tighter! The top three are separated by less than three percentage points. If you're looking for an exciting finish then look no further than the London minileague!