Jonathan Holiday still leads but Pete Antrobus has managed to split the previous leaders overtaking Mark Reeder on both points and species. The patch first Caspian Gull proving the difference here. Phil Woolens updated score sees him streak up the table into 5th and also join the 100 club. The remainder of the pack slip down one but stay in the same order. 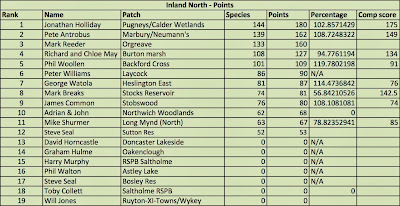 There are now five centurians in the comparative table with Phil Woolen now leading the way at Backford Cross. George Watola is hot on his heels with 114% and with a lower comparative score he only needs a handful of species to catch up. Pete Antrobus is close behind but his higher comparative score makes bridging the gap extremely tough.