Onto the points league and it's the a repeat at the top where Anthony Bentley heads the table with Joe Stockwell still hot on his heels in second. Anthony added 10 points at Frampton including a Great Northern Diver whilst Joe faired slightly better with 13 additional points including the Bonaparte's Gull which he managed to get his girlfriend to drive him to after a heavy night out in town. Joe will have to watch his back as spring progresses as Jonathan Farooqi had a cracking month in the north-east adding 21 points to take the final podium position including two patch firsts in the form of Willow Tit and Red-legged Partridge.

Looking further down the league and it is good to see the return of Bardsey's Ben Porter after a few months abroad at the start of the year. Straight in at 12th I'm sure we will see him climb up the league as spring dawns. The highlights section of the score submissions held a classic sweep of late winter visitors such as Red-necked Grebe for Lee Fuller, Brambling for Rhys Chivers and Short-eared Owl for Daniel Gornall, mixed with the first returning migrants including a very early Little Ringed Plover for Matthew Bruce at The Puddle on the 9th.

April has seen the regular summer migrants appear in droves and a fair few scarcer species thrown into the mix, will any NGB's be able to capitalise on the migration? 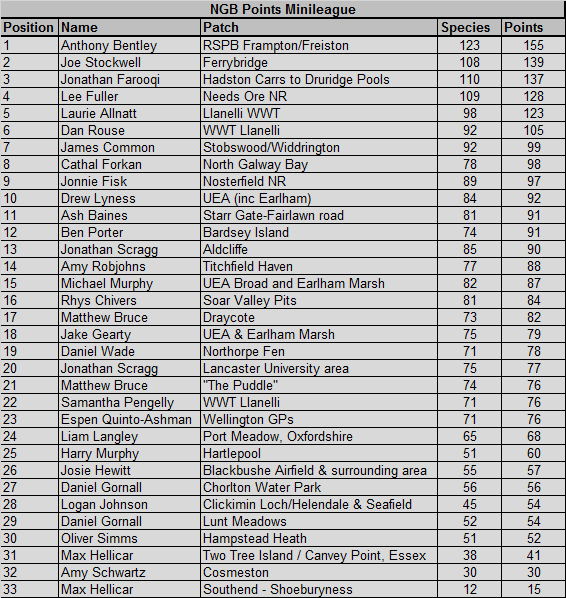