Two extra veteran patchworkers entered onto the Wales minileague comparative table during March including Alison C at LlanfairTH with no less than 85.366% and straight into first place (Tawny Owl her highlight of the month). Half of the contestants are already now over 60% to boot.

Almost a third of the contestants on the points table are over 100 points, a fine tally considering there's now a total of 35 folk taking part but Laurie Allnatt still holds on to first place at Llanelli WWT. All of the top ten were close to breaking the 100 species barrier in March and will no doubt make that leap through April. Henry Cook at Little Orme claims the highest points per bird total with 1.259 (Surf Scoter his best find during the month).

A Dartford Warbler found at Sker and Kenfig was the first for that area for many years, a great find by David Carrington. Ogmore Estuary produced one of the other best finds of the month with a Great White Egret for David Ripley. Several folk were more content with returning migrants, even if they were expected ones (the welcome sound of singing Chiffchaff mentioned by many).

The Welsh league sees some great 'Green' effort with Marc Hughes still claiming top place as a non-motorised patchworker and an ever impressive list of contestants with BirdTrack records into the thousands (Laurie Allnatt with the highest at 3,352) and complete lists into the hundreds (Alastair Flannagan with the highest at 152). 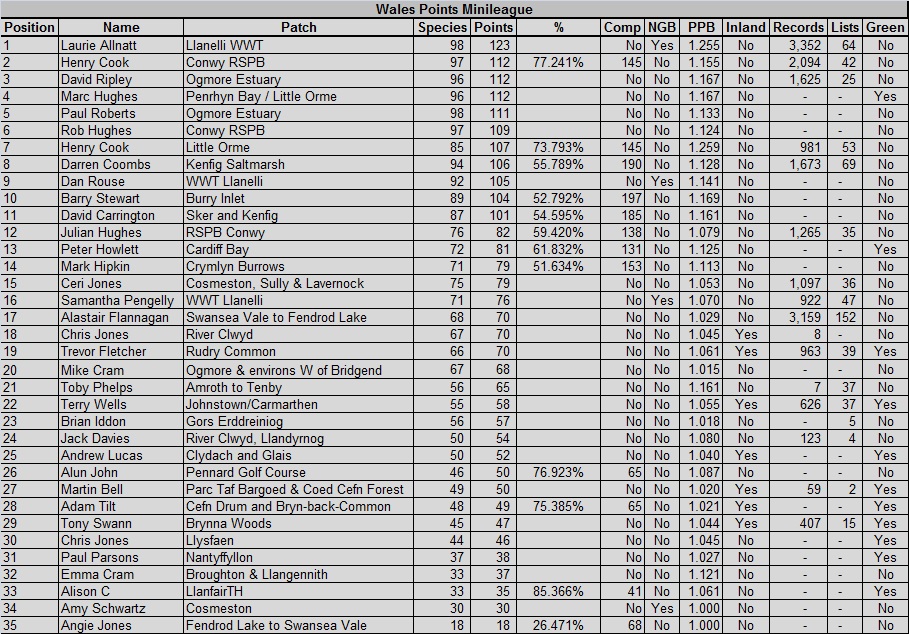