Congratulations to Adam Nicholls for winning the comparative with a mighty 145%. A very impressive effort Adam. James Emerson beats Nick Moran to second place with a good December thanks to a Velvet Scoter (patch tick) and Scaup. Nick drops to 3rd despite a Lapland Bunting on patch and a Hawfinch in his garden, a great duo so late in the year and increases our suspicion that Thetford has moved to the coast! Ben Moyes extends his lead in fourth place over Tim Phillips and Jim Bradley as he had a great month with Cattle Egret, White-fronted Geese and Goosander added. It was a good month for White-fronted Geese as Ben Rackstraw, Mike McCarthy and Nige Lound also added them during December. Rob Lucking finished the year at Colkirk with a Kingfisher, a colourful patch tick.

The top 3 didn't change in the points league during December so its congratulations to Ben Lewis as his very impressive year at the Mid Yare see's him win quite comfortably in the end. Jamie Wells holds on the 2nd despite the efforts of Luke Wake, although his Siberian Chiffchaff in December wasn't quite enough to catch Jamie. Nige Lound leap frogs Nick Moran into 4th courtesy of his PPB score. Rob Pople managed to get a December patch tick in the shape of a Smew at Milton CP. It was great to see 23 patches all recording over 100 species this year, a testament to the hard work put in by everyone. 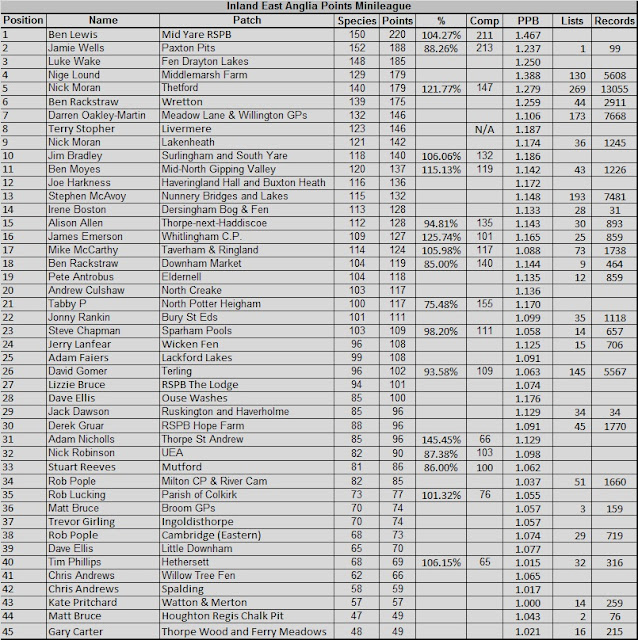 Reading the list of year highlights makes me wonder if some patches are inland!! It truly has been a great year for the Inland East Anglia Minileague. Ben Lewis had a memorable year and struggled to pick a bird of the year from Little Tern, Penduline Tit, Bee-eater or Savi's Warbler. All great finds inland. Other national rarities included the Great Reed Warbler Jamie Wells saw at Paxton Pits, Nick Morans Little Bunting at Thetford (Lapland Bunting completing an amazing bunting bonanza there), Nige Lounds Caspian Tern at Middlemarsh Farm and the Black-bellied Dipper on Ben Moyes patch at the Gipping Valley. Its not all about rarities though and many of the patches benefited from the invasion year for several species, Yellow-browed Warbler a highlight for Joe Harkness, Rob Pople and Alison Allen while Waxwings and Curlew Sandpipers were mentioned on a few patches too. Lets not forget the moments of patch gold that have been etched into the memory of patchers this year, Irene Bostons Coot at Dersingham Bog was a patch tick and a Knot for Martin Oakley-Martin was a first for the county in 3 years, pure patch gold.