Congratulations Tim Farr! Sutton Bingham's finest has had an excellent year (you can read about it on a special blog post here). He had a great final month adding Firecrest and a Black-necked Grebe on the 31st December, an excellent finish to an excellent year which included finders point for a stunning Spotted Sandpiper amongst the most memorable moments.

Stephanie Brown finished in second, just a whisker ahead of Richard Scantlebury in third. Whilst no additions of note in December both had scored over 120%, a superb performance marked with annual highlights of Cetti's Warbler and Yellow-browed Warbler respectively.

Twelve patch birders beat or matched their comparative target, three of whom ended up bang on 100%. Great effort all round.﻿ 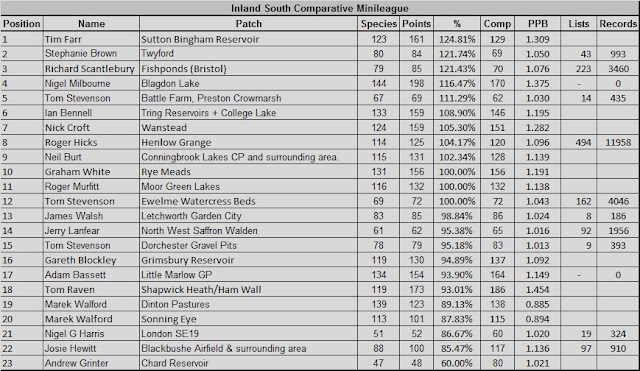 Nigel Milbourne ends the year at Blagdon Lake on 198 points, an excellent total for an inland site and 25 points clear of his nearest competitor. Nigel has been birding Blagdon Lake for 24 years now, but December 2016 will go down in the memory as he added Jack Snipe, Bearded Tit and of course Blyth's Pipit to his patch list in the space of 48 hours. Congratulations to Nigel, the pipit really was a superb bird and finders points added too! 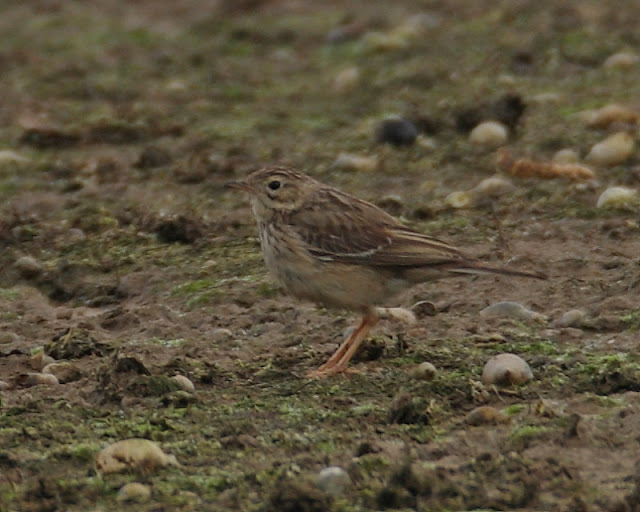 Playing for the podium spots, Tom Raven (he of Hudsonian Godwit fame) takes second place despite no additions in December. Brendan Sheils could not take advantage however, and ends in third. Well done all. 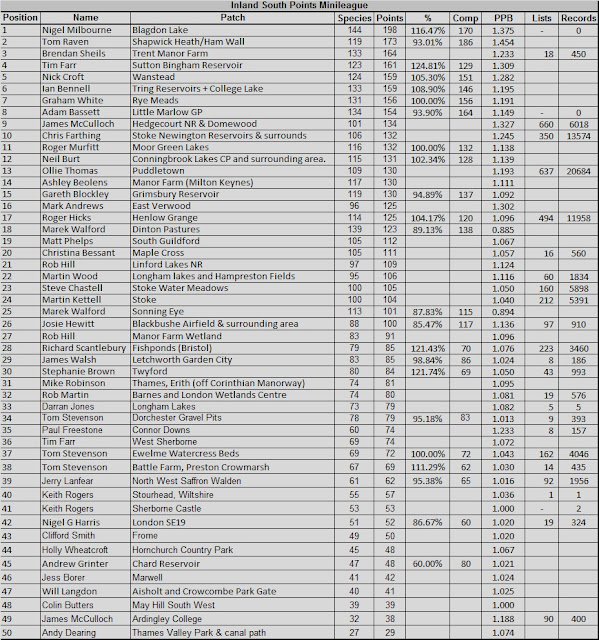 December turned up a few good birds around the Inland South league aside from the Blyth's Pipit. A Glossy Ibis at Stoke Newington was an excellent find for Chris Farthing as was an inland Brent Goose. The Cattle Egret influx in December made it's way onto Ollie Thomas's Puddletown list whilst a Little Stint was an unseasonable addition to the Longham Lakes yearlist.

A Yellow-browed Warbler found it's way to Wanstead in December. Caspian Gulls were found in December at Grimsbury Reservoir and Rye Meads while Scaup found their way inland at Dinton Pastures and Linford Lakes. Finally, a good December for Neil Burt saw Grey Partridge, Woodcock and White-Fronted Goose keep the score ticking up right to the end.

Well done to everyone who competed in the Inland South league in 2016. Hopefully we will see many of those in the points league this year move into the comparative league also in 2017. It really was an excellent year, with amongst the highlights Herts' first Bonaparte's Gull, Black Stork, Red-Footed Falcon, Ortolan Bunting, White-tailed Eagle, Wryneck, Spotted Sandpiper and Blyth's Pipit. An amazing year and a credit to those covering a network of patches right across the south.
Posted by Pat Work at 17:52